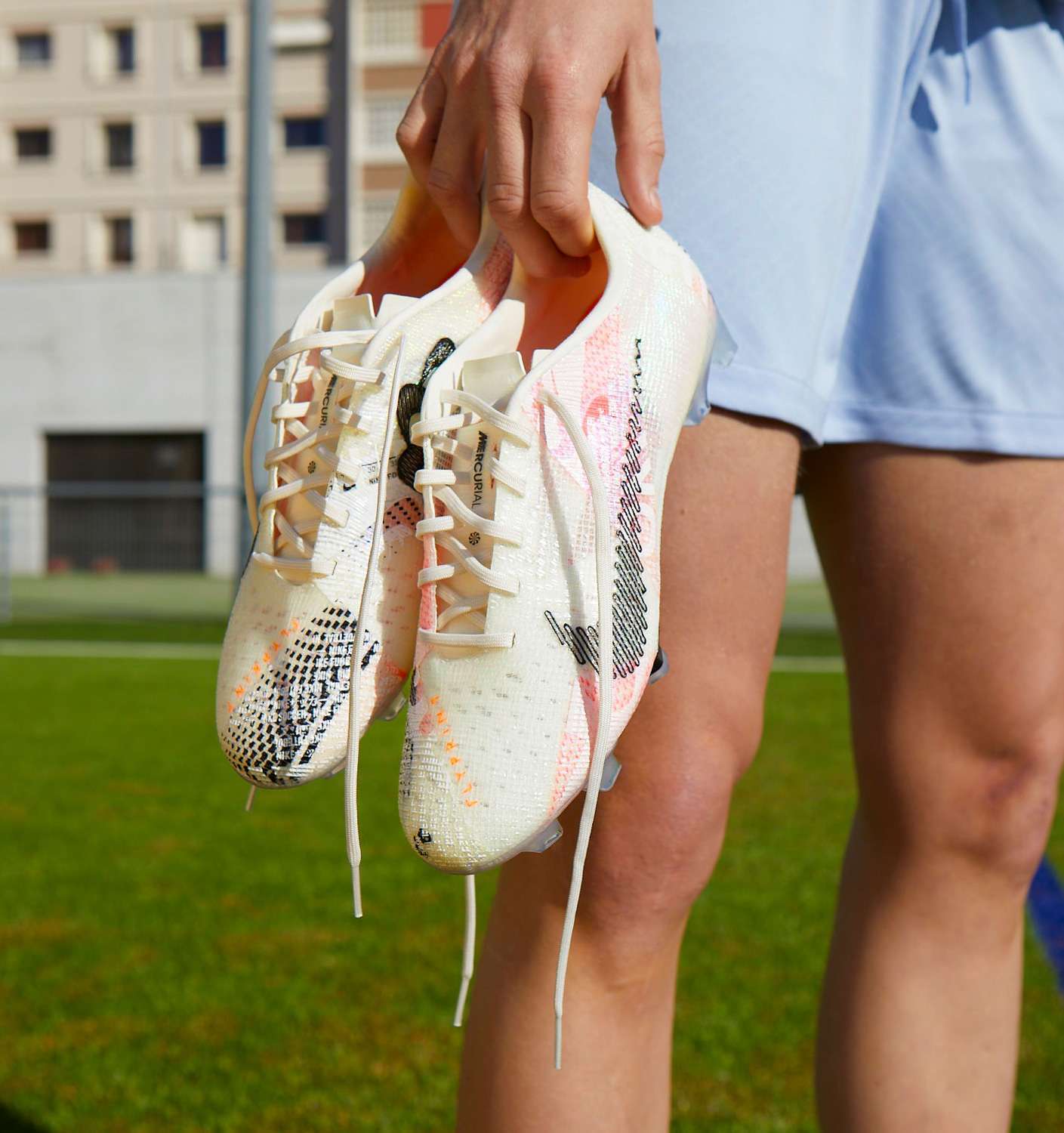 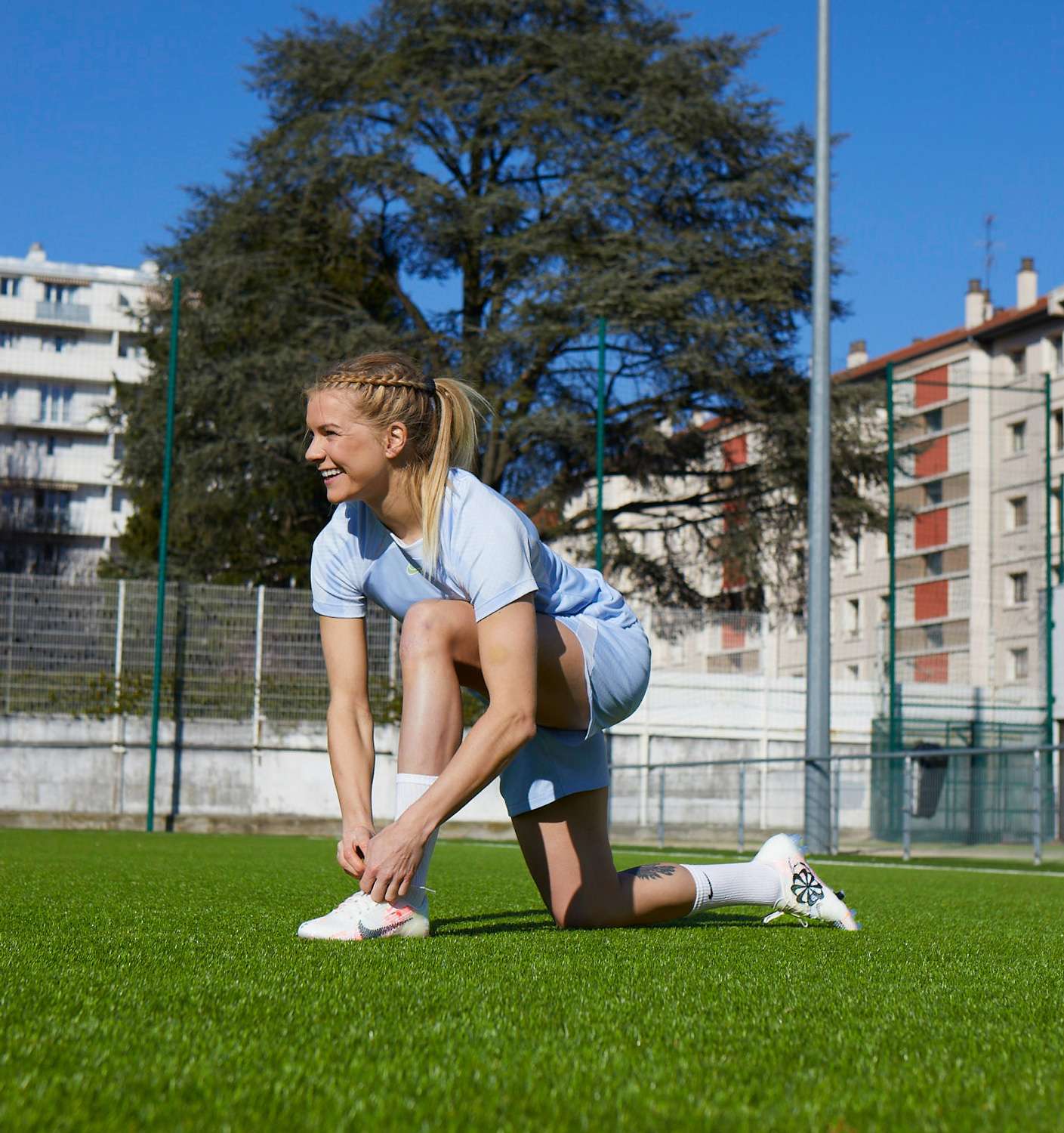 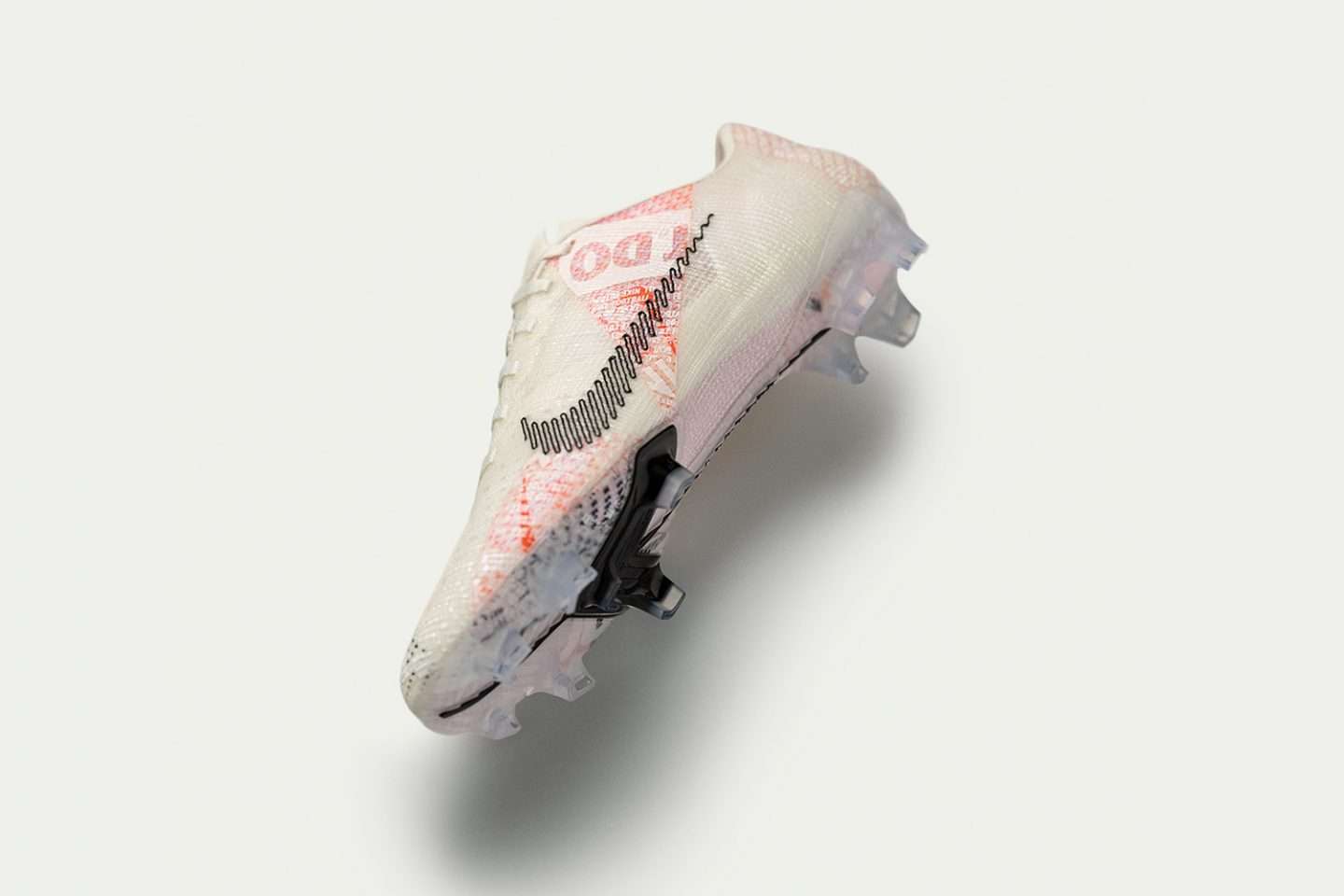 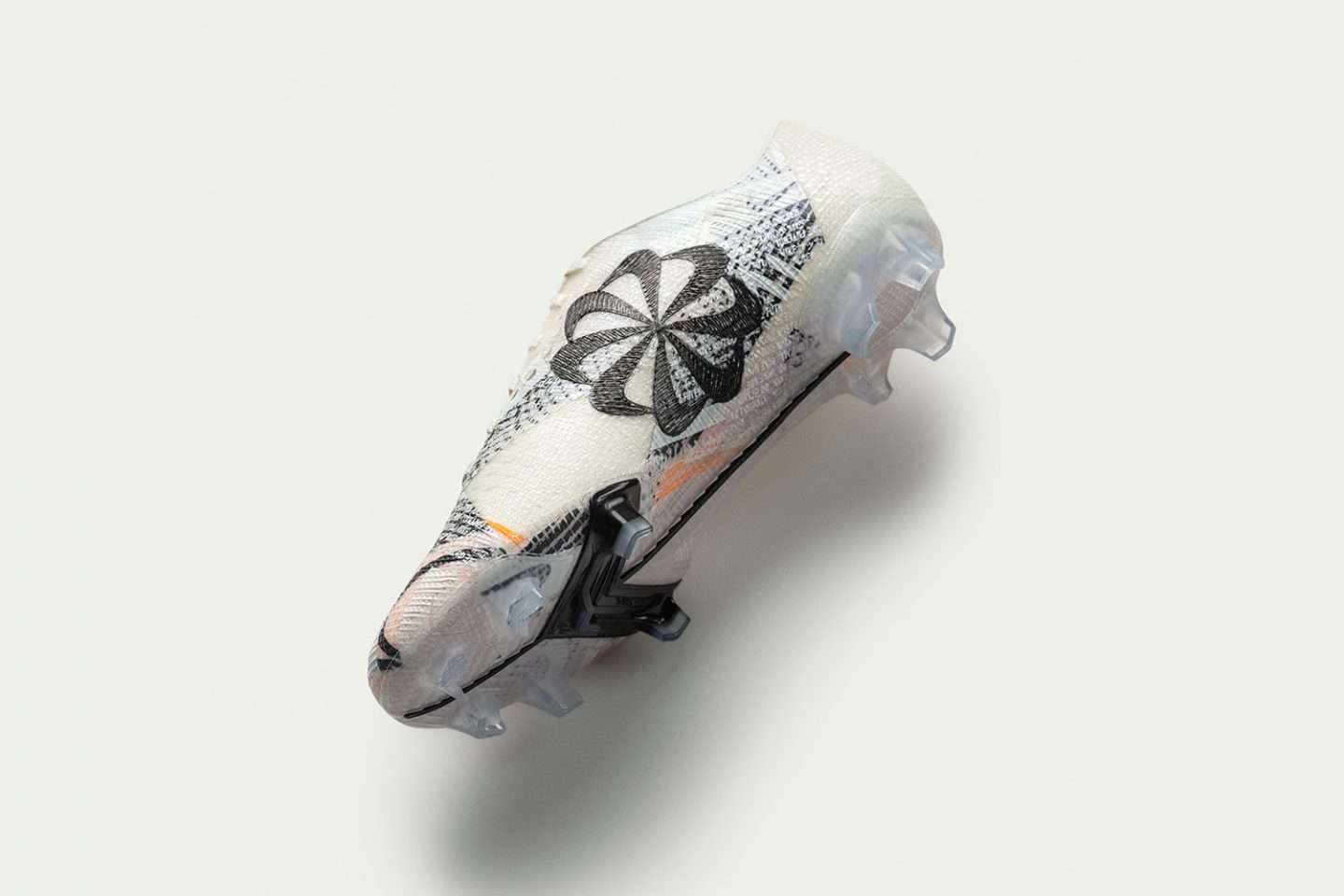 Hot on the heels of the Pegasus Turbo Next Nature comes Nike’s eco-minded shoe for the soccer world: the Mercurial Vapor Next Nature.

The Mercurial Vapor has been the go-to boot for some of the fastest and most talented players in the world. The likes of Didier Drogba, Thierry Henry and Zlatan Ibrahimović have all relied on its innovative and speed-loving design since its debut in 1998. It’s the boot that Cristiano Ronaldo outran a Bugatti Veyron in (if you believe what you see in the commercial).

Since its debut, it has been reinventing itself and pushing the envelope in terms of material design. In 2008, the Mercurial Vapor Superfly was the first boot to use Nike Flywire technology. In 2012, the Nike Mercurial GS [Greenspeed] featured recycled and renewable materials throughout the upper and the plate design. And today, the Mercurial Vapor Next Nature is made with at least 50 percent recycled content by weight.

Let’s go into detail. It features a very satisfying 100 percent recycled midsole plate, heel counter and chassis. No half measures here. The four-layer upper is made with a combination of materials and technologies including Flyprint, recycled poly, recycled TPU and manufacturing scrap.

What’s also good to know is that the innovations being learned here will be scaled up for the whole Mercurial line-up. By fall 2022, the majority of Mercurial boots will be made with at least 20% recycled content.

The design of the shoe is reminiscent of last year’s Air Zoom Alphafly Next Nature. Similarly, it uses Nike’s Flyprint technology. This is a 3D-printed skin that reduces waste by only printing the exact amount of material needed. It’s also lightweight and more breathable than traditional knitted or woven textiles, and retains almost no water.

The Mercurial Vapor Next Nature is mainly white but its use of layered materials gives it depth. Hidden amongst those layers are orange and black graphics: cuttings of “Just Do It” slogans, an embroidered Swoosh mark and the Sunburst, which signifies Nike’s sustainably-minded designs. It’s a good-looking boot that wears its eco sensibilities on its, erm, skin.

But this is not just a good-looking experiment with recycled materials. This is a fully functional, working soccer boot. Just ask Norwegian striker Ada Hegerberg: “The Mercurial Vapor Next Nature brings me what I require from the Mercurial design: tightness, speed, and the ability to make quick turns, along with this new way of making the product we need that has a lesser impact on the planet we love.”

Make sure you look out for it on the pitch in the coming months.

Nike hasn’t provided a release date for the Mercurial Vapor Next Nature. We expect to see a rolling release across the globe, so keep an eye-out on your local retailers. 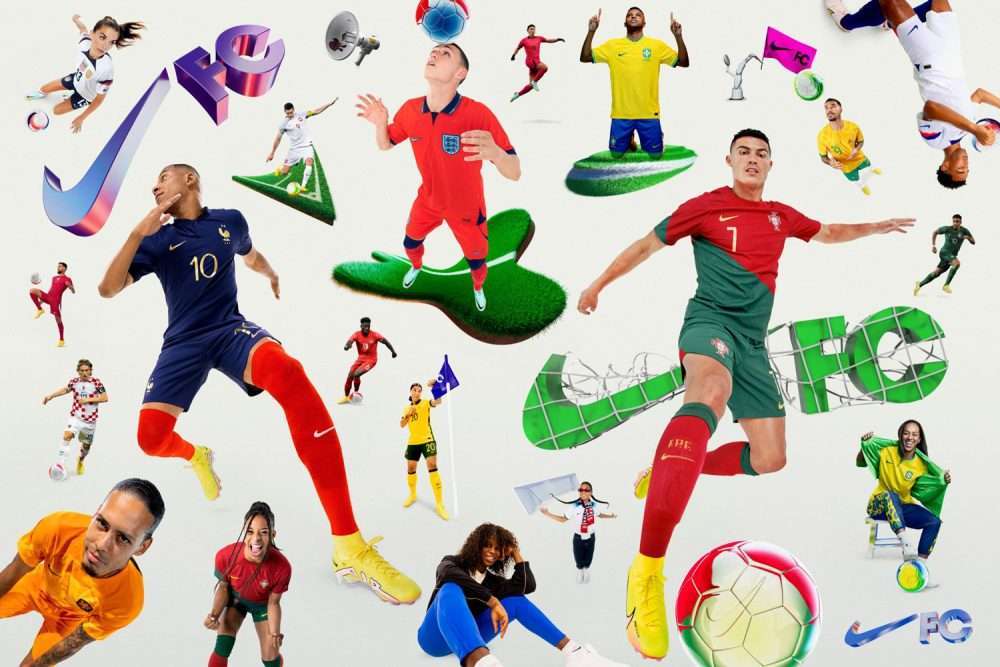 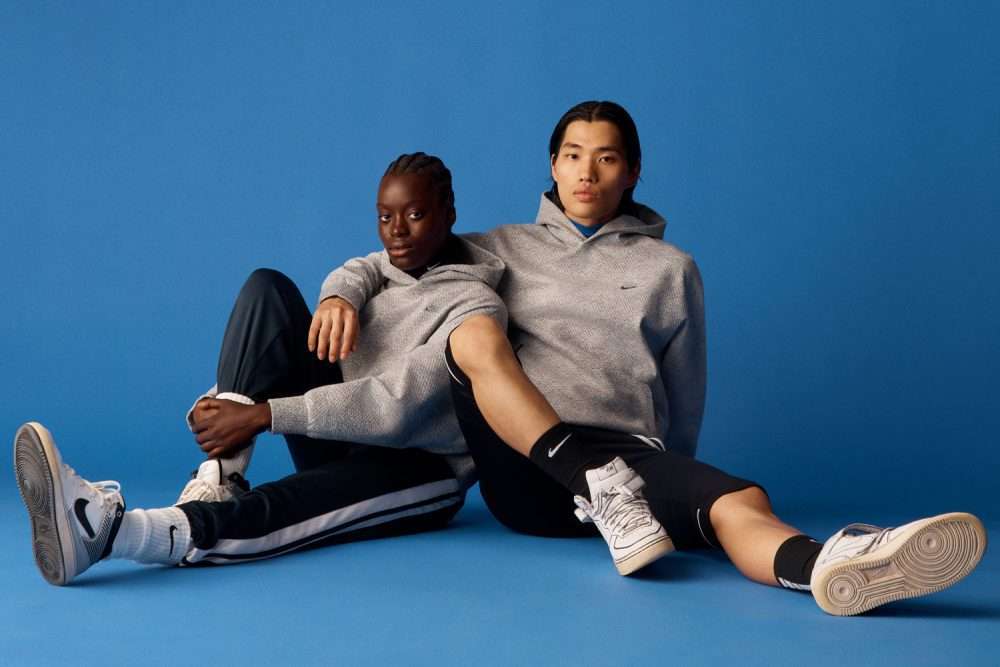 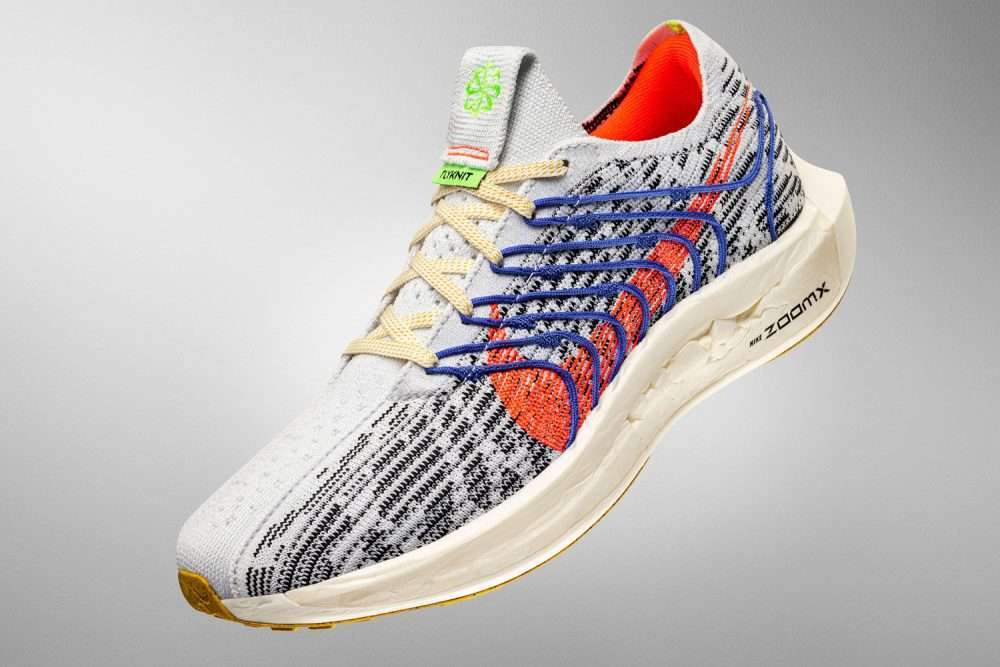 Fashion
10 hours ago
by James Roberts
Mami Wata’s Collection of Repurposed Sweatshirts Documents the Journey of Our Clothes
> The South African surf brand has repurposed second-hand clothing from local markets with bright graphics and a true story.

Footwear
2 days ago
by Sofia de la Cruz
ekn Releases the World’s First Shoe Designed in Bangladesh and Made in Europe
> This PETA-approved vegan sneaker, the Kamthala, is turning the fashion industry upside down, proving creativity is borderless.

Fashion
7 days ago
by Sofia de la Cruz
Forét Takes a Walk in the Woods for Fall/Winter 2023 Collection
> Using a mix of recycled and natural materials, the outdoorsy range delivers a friendly reminder to enjoy AND respect nature.